As my sister said - WTF people! 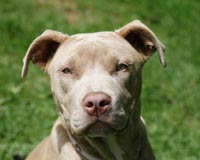 On March 17, Antonio Ray, 37, allegedly dragged a pit bull from his bicycle through the Ardmore, Oklahoma city streets. Many witnesses called police, and one took a picture of the incident using his cell phone. A witness described the horrifying scene, "[The dog's] arms were behind it, its chest was on the ground and there were streaks of blood. And we went back afterwards and measured it, four-tenths of a mile he dragged this dog. The pads of its feet were gone and it was laying in a pool of blood." Authorities took the tortured dog to a nearby animal shelter, but he died before he could be treated.

Take Action!
Use ALDF's automated web form to send a letter to Assistant District Attorney Brad Noland, encouraging him to seek the maximum penalty upon conviction.

Thank you for taking action and speaking out for animals!