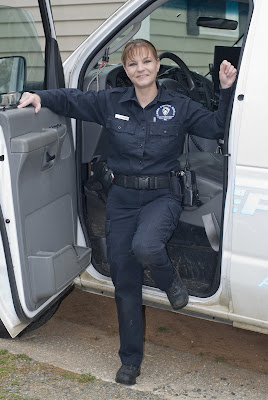 Well a bit of wildlife drama in my backyard today - discovered while noticing my 4 legged family was circling my woodshed like the Indians circling a wagon train. Realized quickly I probably had a mama raccoon w/ babies who has set up home in what in her world must seem like the Ritz Hotel. She's got a roof over her head, shelter to keep her babies warm & dry AND safe from that huge circling hawk overhead, near the garbage cans for food...what more could a Mama want.

Anyway, I called several agencies - some wanting as much as $300 to move the "masked ones" and in this economy I said no. So in desperation called the local CharMeck Animal Control And of course I made sure that they would not kill them but would instead put them in the woods behind my house. So they sent out Officer Jennifer Johnson - who it turns out is a HUGE pit and animal rescue person (done it all her life) and very informative about raccoons. What a treat to learn that your local government hires such skilled and caring persons. She advised me, since I care about wildlife, to leave the mama and her babies alone for 2 wks but to sprinkle some dog hair inside the shed - in hopes she'll move on her own. IF not in two wks Office Johnson is coming back out and will get the mom and her then older babies and move them to the woods behind my house.

Great ending to an interesting afternoon. AND everyone ends up happy - including me for the welfare of the animals as well as my tax dollars at work. Did not cost me one red cent which is a bonus.

Anyway - I will be sure to post photos of the babies and Mama Raccoon when we make the move.