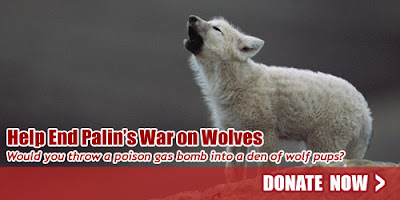 Palin Administration Calls in the Helicopters for Sweeping Wolf Massacre
Legality of program challenged as state personnel in helicopters aim to kill hundreds of wolves despite objections from the National Park Service
(March 18, 2009) The Palin administration considerably escalated its aerial wolf killing spree this past weekend, with full details only becoming clear in the hours after the killing initiated. At least 58 wolves have been killed in the Upper Yukon/Tanana area of Alaska over the past 4 days by Alaska Department of Fish and Game staff, which indicates that their target of approximately 250 wolves will be easily met.

Go to the link and read the entire article. http://www.eyeonpalin.org
Posted by Unknown at 10:37 PM