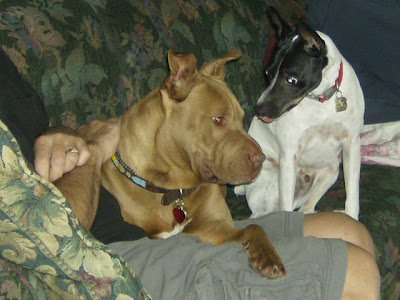 "Here's a happy ending story for my boy, Ted E. I found him at South LA Shelter. It's a rough area, known for gang violence. Ted E came into the shelter with his right front leg hanging from his body, in shreds. Most likely, a bait dog. They were going to kill him, because, he was in a lot of pain. He was only 9 months old. I couldn't let that happen. I saved him and sent him to a vet who amputated his leg. He went through extensive training and I took him up to Brittany Foundation, of which I am a Board Member. He was such a sweet boy and so obssessed with his tennis balls! He was overlooked time and again, until one day we got a call from a family who had adopted a three legged dog from us, several years ago. She had died from cancer and they mourned her, but, wanted to save another "special" dog. They saw Ted E on our website and knew he was the one. I drove him 2 hours to San Clemente. He met them and fell in love! Now he has a sweet little brother named Odie. Ted E's come a long way from South Central L.A. to living the high life on the beaches of San Clemente. :)"
Posted by Unknown at 12:36 PM